i have always been different

maybe it started when my dad decided to drag me through africa, drop us off with the circus and settling, temporarily, in Cercina - a small little village outside of Florence. i remember the little boy who decided i was his prisoner, since the italians won the war over the germans after all (?) i spend my first year of school in a little class room that held four grades and one teacher. 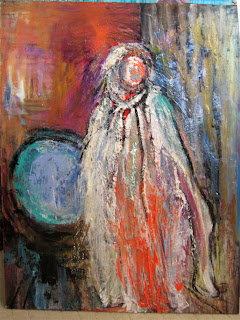 maybe I started feeling different when I started German grade school and  i was put in the "special class", since i barely spoke the german language anymore.
Soon after, I decided to not to go back to school and I stayed home. Nobody really noticed. Until one day the police came to pick me up, since school is mandatory in Germany.

I remember then always drawing; most the time nobody cared about my drawings. my grandfather was a painter and his art was all over the place. Some pieces were ordinary, made for sale, but other pieces were large beautiful, kind of abstract and full of color.
I didn't know my grandfather much, him and my grandmother divorced before I was born. He was an outsider they told me. My mom would tell me stores on how he behaved when she was little. How during the war, he and my grandma would get into a fight and the eggs he was paid with for a painting, would end up being thrown on the wall. Or how he would sit in his room and lock the doors for 3 days and nobody could come in.
being an artist was a bad thing; irresponsible- you didn't care about other people only about yourself.


All of my family were interprenours owning restaurants, bars and even a playboy nightclub, which in Germany, put them into the outsider category. they went to bed late got up even later. The cycle of a night person. I could get my mom to sign anything and everything without reading it early in the mornings.  So I got away with a lot, but actually I also missed out on a lot of education. I'm not talking about the regular education, I'm talking about the social part.
I like people and I want to interact with them, but I can't I don't have the skills for it.
instead i would express myself though art, mostly drawing and painting,and small short stories. often i hid my art from my mother who would evaluate my work when she got a hold of it and had time to look at it. usually she would say that i was "unhappy" or i was disturbed by something, or simply tell me that it wasn't done right. later i remember art history classes where the teachers would show us early works of an artist as a child, my family didn't keep anything i made.
art became my friend. my thoughts, my feelings and fears were transformed into something i could look at, read and evaluate more clearly. i didn't think much of it, it was just there- just mine.
my life stayed unusual and rebellious when i married at 18 and moved to the usa. i had been taking university classes through the university of maryland european division, when they realized that my german highschool education was below american standards. i quickly took the GED and passed it with flying colors. i became an english major until one day i saw all the different art classes listed in the catalouge.
my world changed when i became an art major. suddenly there were people that enjoyed art, valued art and made art themselves. finally it seemed i had found my place in the world.

during my last year i connected with a group of people that felt the same way i did, unhappy with the status quo, unhappy with the world and its lost opportunities. misfits. however, they weren't regular artist that paint and draw- they were musicians with a grand vision, a community and a common goal. to move to seattle and start an independent record label. i could sing, i could write and i could express myself through music. i went for it.
in the next four years i learned that music and painting are closely related. i also learned that like painting, music isn't fair and talent isn't all one needs. most importantly i learned that misfits or not, my social skills were still inadequate and expression in a group complicated.


For me Creativity can have many outlets. I enjoyed singing, merging my energy with others directly and immediately. I feel that true creation does happen when I am in the “zone” and music is a great catalyst, But I am not a bar person (grew up in them can’t relax there)and as mentioned, I am socially handicapped.

Painting is something I do alone. I plan out the first sketch and then frantically attack the canvas- then stop again. Evaluate and think about what happened. I correct, adjust the motif and move back into the work. This repeats as often as I choose, me alone until I am done.

so i am not usual, i have had many obstacles in my life and i have overcome them.
if nothing else i am determind to make my so called "mark" in the world, because i know i do have something to say, a story to tell and questions to ask.
i do not give up, and while i sometimes take detours and change my course, in the end i do find what i need.
creating art is my tool to achieve what i need, it allows me to "speak" and connect to others.
i can tailor my art to others expectations, since i am a good craftsman. but i have much more to offer than that.
i am innovative, critical, educated and talented.
i am brave, fearless and determined
i am an artist :)
Posted by Carla Dreams

Promote Your Page Too