what a visit in time 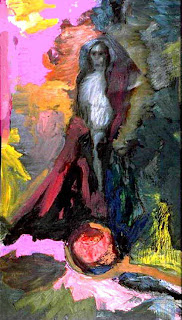 i know of astrology card art, during the late 90's i looked at a lot of them. the Haindl tarot deck is probably one of my favorites. the death card often shocks the viewer, while it simply means rebirth.
working with the "Spirits and Monsters" series has reminded me of that. new in my visit in time will be the reinterpretation of "Death". Originally started in the early 90's as a large charcoal drawing, i continuously worked on it until the late 90's when the original disappeared. I don't really know what happened to it.
Posted by Carla Dreams

Promote Your Page Too